Today during one of the most historic races in a America, two explosions rocked the Boston Marathon, in Boston, MA. causing more than 144 injuries and leaving 3 dead including spectators and racers. Preliminary witness reports hearing two separate explosions near the finish line of the marathon about 15 seconds apart form each other as many of the racers were preparing to finish the race. Emergency responders are on the seen attending to all who were injured. Right now FBI investigators and law enforcement officials are investigating to determine the cause of the explosions and they have not yet released a statement about the definite cause of the incident, and they have neither confirmed nor denied whether this was a planned bombing or unfortunate explosion due to some type of unforeseen infrastructure failure.  Currently counter terrorism units are seen working with local and federal officials to help determine the cause of the incident as well.  Vice President Joe Biden has released a statement stating ” That his office has just been made aware of the incidents and that the thoughts and prayers of himself and his office are with all of those effected and they are waiting on information about the cause of the explosions as well.  My thoughts and prayers are with not only the city of Boston but also to the families of all of those who are effected. This is truly a confusing and perplexing turn of events and I am cannot wrap my mind round what could potentially be the motivation behind this incident and I will be keeping a close eye on events and actions not only surrounding this incident but events to come.

A friend of mine sent me this video a little while ago & I finally got a chance to sit down and watch the short film in it’s entirety. This is basically a video of compiled research disputing many of the facts that the media has perpetuated and reported about the Sandy Hook elementary school shooting.  This video has honestly open my eyes to quite a few inconsistencies with the way things have been reported, and the behavior of some of the parents of the victims. Now personally I have NEVER been one to take the reports of the Mass Media at face value and so unwittingly believe what is reported, but due to the horrific nature of the crimes reported I was so engulfed with emotion & personal feelings that I blindly accepted what was told to me. Now I am not saying that I agree or disagree with this video, or the media reports but this video has opened my eyes to tons of issues that I was not previously aware of. My advice to anyone who watches this video is to look at with an open mind and do some research for yourself, because in this day in age you cannot put anything past the Government nor media, and you certainly cannot believe EVERYTHING that is being told you. 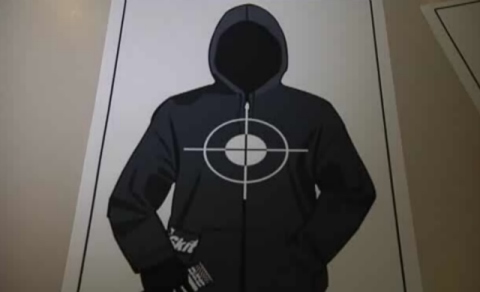 Below is an email i received form Change.org about a series of Trayvon martin themed gun targets that are now in production and are apparetnly seeling out in droves around southern areas of the United States.

“In the past couple of days, news sources have reported that the Hiller Armament Company of Virginia has been selling gun targets that look like Trayvon Martin, complete with a hoodie, Skittles, and iced tea.

It’s not just vile, it’s possibly illegal: Virginia law says that no one can profit off of the likeness of any person without his consent — even if that person has been killed. But as soon as reporters started asking questions, the Hiller Armament Company shut down its website and disconnected its phone.

Tahir Duckett lives in Virginia, and he wants Virginia’s Attorney General, Ken Cuccinelli, to investigate the Hiller Armament Company and punish them if they have broken the law.”

A an American who believes in freedom and the right to bare arms I am honestly disgusted by this target and the lack of respect that it shows on behalf of the not only the manufacturer but on the people who utilize these targets. Regardless of how you feel about the case a 17 year old boy is dead so to make a shooting target in his likeness is beyond reprehensible and disgusting and there are no words in the English language strong enough to express how much I loathe this target and this concept.  Below is a link to the change.org petition if you would like to sign it and join the cause.

This was an email I received from Change.Org in regards to the arresting of a 6-Year old who had a temper tantrum in class. This story is Truly unreal and you have got to read this email. This story is truly unreal and to be honest I really don’t have to many words for this nonsense. What kind of world do we live in where a baby can get arrested for simply acting out as a child would do. Please read the story and if you are sympathetic sign then feel free to visit change.org and sign the petition.

Salecia Johnson is six years old. On April 13, her teachers say she had a temper tantrum in class — but instead of putting her in time-out, the school called the police.

Salecia was handcuffed, charged with battery, and kept in police custody for an hour before her parents found out what was going on. Though all charges have been dropped, Salecia — a 6-year-old —  now has an arrest record.

Salecia’s mom, Constance, says that “Salecia has been traumatized by this experience. She’s afraid to return to school and recently woke up in the middle of the night saying ‘they are coming to get me.‘” Constance wants to make sure that this incident won’t affect Salecia’s future, and she wants answers about why police officers were involved in the first place.

So Constance started a petition on Change.org demanding that Salecia’s arrest be removed from her record and that Creekside Elementary pledge to stop involving police in school discipline.

Constance believes that what happened to Salecia is part of a larger problem. Schools across America are adopting “zero-tolerance” policies that are making police involvement in school disciplinary matters more and more common, according to the Advancement Project, a group working with Constance’s family.

If thousands of people sign Constance’s petition, the police and the officials at Creekside Elementary will see that they can’t arrest and handcuff a six-year-old girl without facing public consequences. Schools around the country will take notice — and Constance hopes there won’t be another child that faces what Salecia did.

Click here to sign Constance’s petition demanding that Salecia’s arrest be removed from her record and that Creekside Elementary pledge to stop involving police in school discipline.

Thanks for being a change-maker,

– William and the Change.org team”